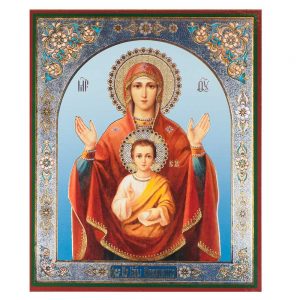 Jesus Christ has become incarnate. He could have appeared as an adult with no human mother, but He chose to make Mary the agent of his Incarnation. Mary shows us Christ in a way that Christ Himself does not show us: the perfection of a soul by Jesus Christ. All of the glories of Mary—her Immaculate Conception and sinless life, her Glorious Assumption, Coronation and power as Mediatrix—all these are nothing else than the dictum of the Blessed Apostle: Christ in you, the hope of glory (Col. i. 27).[1] Mary is the perfect manifestation of partaking in the divine nature (II Pet. i. 4).

Therefore devotion to the divine person of our Lord is devotion to Jesus Christ according to His person. Devotion to Mary is devotion to Jesus Christ according to His power. This mystery is particularly shown when the voice of Mary herself causes St. John to leap for joy (Lk. i. 44). Shall we accuse St. John of not being Christ-centered? God forbid! But in the mystery of Mary, hidden just beneath the surface (as in utero, so also spiritually): Christ in you, the hope of glory.

The Hail Mary is a prayer to Jesus Christ in Mary

The Holy Spirit spoke the first part of the Hail Mary by the mouth of the archangel Gabriel (Lk. i. 28). God announced through Gabriel that, having sanctified her, He intended to unite His Son to her, and through her make Him manifest to the world. This exchange is the same for every Christian soul. Our God sanctifies a soul in Baptism, the soul then comes to know the Lord through a personal union, and Jesus Christ is manifest through holiness of life.

Hail Mary
Full of grace
The Lord is with thee
Blessed art thou among women and blessed is the fruit of thy womb, Jesus

Thus every soul becomes filled with grace (although of a different measure than Mary), the Lord comes to be “with” them, and they become “blessed” to make present Jesus Christ. The reality is the same, but the mode and the measure are different.

Therefore let every man come to Mary, the Mother of Divine Grace and in her, be united to Jesus Christ Incarnate.

St. Augustine speaking to our Blessed Lady says, “You are worthy to be called the mould of God.” Mary is a mould capable of forming people into the image of the God-man. Anyone who is cast into this divine mould is quickly shaped and moulded into Jesus and Jesus into him. At little cost and in a short time he will become Christ-like since he is cast into the very same mould that fashioned a God-man (True Devotion to Mary

From my view, the best work on Marian piety is True Devotion to Mary

The Meaning of Catholic@meaningofcath·
18h

There is nothing more dangerous than to confide in our own strength, and trust to feelings of fervour. We are full of malice, and capable of committing the most enormous crimes, unless God supports us.

The Meaning of Catholic@meaningofcath·
10 May

The Meaning of Catholic@meaningofcath·
6 May

"The Liturgy of the Home"

Catechizing your children with the beauty of the faith!

The Meaning of Catholic@meaningofcath·
3 May

Pius XI is the crucial pontificate to understand the event of Vatican II and what came after.

At the beautiful Baroque Cathedral of St. John the Baptist in Trnava, Slovakia, the first ever Ukrainian language Paschal Divine Liturgy. Got to love Our Lady of Fátima enthroned next to the Altar. @meaningofcath @kennedyhall