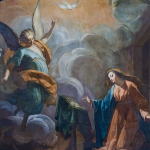 Editor's Note: this is the third in a series from Mr. Hall. Read his part one and two on death and judgement.  By Kennedy Hall Less than a week remains until the Nativity of Jesus Christ. In these final moments, the veil between Heaven and Earth becomes very thin. We stand at the precipice of the triumphal Incarnation of the Logos. For twelve months we have toiled and … END_OF_DOCUMENT_TOKEN_TO_BE_REPLACED

Whether you are a cradle Catholic learning the Holy Bible or a Protestant convert divesting yourself of your Protestantism, this book on the Scriptures is for you. The only book of its kind from a traditional Catholic perspective, it cuts through the fluff and gets to the heart of the spiritual realities which are fundamental to all discussion on the Holy Bible. It also tells … END_OF_DOCUMENT_TOKEN_TO_BE_REPLACED

By Kennedy Hall Continuing in our theme of the traditional mediation of the Four Last Things, this week we will consider the reality of Judgement. To begin, we must distinguish between the two forms of judgement that pertain to our eternal life. First, we will each experience our own Particular Judgement. This means that we will stand before Our Lord and give an account of … END_OF_DOCUMENT_TOKEN_TO_BE_REPLACED

By Jeremiah Bannister "The ocean is the perfect memento mori. Each crested wave a burst of life. Each collapse of whirlpooled water a stark, sudden end. When the surface stills, only a graveyard can match such a foreboding peace." -- Doonvorcannon, author of "Cerberus Slept" So much of my life has been consumed by ruminations regarding death and destruction, even despair. … END_OF_DOCUMENT_TOKEN_TO_BE_REPLACED

By Kennedy Hall As the Birth of Christ approaches, it is helpful to contemplate the Four Last Things. Traditionally, the Church has taught that Death, Judgement, Heaven and Hell constitute these four final realities. The intention of this article is not to give a detailed theological overview, but instead to give us pause in the hope that we may reflect on these necessary … END_OF_DOCUMENT_TOKEN_TO_BE_REPLACED

The Meaning of Catholic@meaningofcath·
26 Jan

My brother in arms, @kennedyhall continues to be calumniated because he espouses a form of Libertarianism. I don't agree with Hall myself, but don't be uncharitable to your Catholic brother, nor ignorantly misunderstand him as a "Liberal."

The Meaning of Catholic@meaningofcath·
26 Jan

Libertarianism is a practical approach to deal with the wicked, post-Christendom state.

Of course it has errors, but so to the right-wing Integralists

The Meaning of Catholic@meaningofcath·
25 Jan

The free market economy, Libertarian thought, and the Catholic faith

The Meaning of Catholic@meaningofcath·
25 Jan

Conquer Effeminacy and Be a Man - Five Things

The Meaning of Catholic@meaningofcath·
24 Jan

The Marxist / Modern state genie has been let out of the bottle.

Therefore, says @kennedyhall, we MUST implement severe restrictions on the modern state by means of Libertarian methodology.